Unlike other contemporary English-speaking countries, Ireland has one of the oldest vernacular literatures in western Europe, following only Greek and Latin. Irish literacy flourished with the arrival of Christianity in the fifth century; before, the Irish had a simple writing system known now as “ogham.” This system was used primarily for inscriptions, but the introduction of Latin led to an adaptation of the Latin alphabet into the Irish language. This catalyzed the rise of a small, literate class during the Irish Middle Ages. 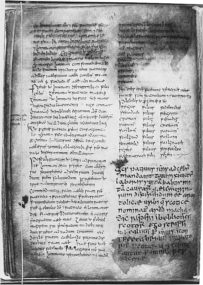 Most early Irish literature consists of lyric poetry and retellings of ancient prose tales. Some of the earliest poetry available, written in the sixth century, portrays an intense religious faith through descriptions of nature. In the ninth century, Ferdomnach of Armagh, a scribe, produced the Book of Armagh—an illuminated manuscript written primarily in Latin but containing early texts relating to St. Patrick. Ferdomnach wrote the first part of the book in 807/8 for Patrick’s heir, Torbach.

A vast range of medieval and Renaissance poetry follows the Old Irish period. Slowly, the Irish created a classical tradition in their own language. Verse remained the primary mode of literary expression; by the 12th century, writers had established a form and style that was wholly Irish. However, medieval writers also created an extensive literature in Latin and a Latin-hybrid, increasing the use of loanwords from Greek and Hebrew that were also used colloquially in Latin texts.

This literary Irish language came to be known in English as Classical Irish. It was a sophisticated language with extraordinarily elaborate verse forms. Classical Irish was taught in bardic schools in both Ireland and Scotland, which produced historians, lawyers, and a professional literary class. Prose continued to be cultivated in the medieval period in the form of tales, and in the 12th century, the Norman invasion introduced a new body of stories to influence the Irish Middle Ages and literary tradition.