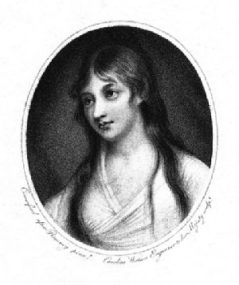 Profile: Mary Tighe is known best for her work, Psyche, a six-canto allegorical poem written in Spenserian stanzas. Born in Dublin to a Methodist leader and Church of Ireland clergyman, Tighe had a strict religious upbringing. At twenty-one, she married Henry Tighe, a first cousin and member of the Parliament of Ireland for Inistioge, County Kilkenny. Mary Tighe’s diary was posthumously destroyed, but, though not much is known about her marriage, it is said to have been fairly unhappy.

In the early nineteenth century, Mary and Henry moved to London. It was there where Mary became acquainted with the poet Thomas Moore—one of the earliest admirers of her writing. Thrust into the literary world of London, Mary began work on Psyche, which was then published in 1805. Written in the notoriously oblique (and often impenetrable) Spenserian stanzas, the six-canto allegorical poem is a rendition of the Greco-Roman folktale of Cupid and Psyche, originally recorded in The Golden Ass by Lucius Apuleius of the Silver Age. Intelligent and deft, Tighe incorporates several allusions to Edmund Spenser’s Fairie Queene throughout the story. The poem originally printed privately, the first edition yielding only fifty copies. However, it was republished posthumously in 1811.

Just a few months after Psyche’s first print, Mary Tighe suffered a debilitating attack of tuberculosis. Though she lived for an additional five years, the last few months of her life were spent at her brother-in-law’ estate in County Wicklow. A year following her death, Psyche was republished, thus establishing her literary reputation. Thomas Moore deeply admired Tighe’s work, penning “To Mrs. Henry Tighe on Reading Her Psyche” in appreciation. John Keats also paid tribute to her craft in his poem, “To Some Ladies.” Tighe’s influence is seen in the work of English Romanticism’s “big six” writers—Wordsworth, Byron, Shelley, Coleridge, Blake, and Keats.